No replies to this topic

I don't have that many truly old scientific calculators, and none using the old VFD display technology, so I was pretty interested to check out this old Casio Scientific fx-102 from 1976.  Accordingly this is one of the very first consumer calculators that had built in fraction support, which came as a bit of a surprise since I thought the fraction feature was something that came about well after the introduction of LCD based scientific calculators.

Well considering the age of this machine and the condition that it is in, top marks all around.  It doesn't look too far off from being new despite it's age of 40+ years.

It is however very big and bulky, and much larger than my fx-82 which was released only half a decade later.  With TN LCD displays already being in production at the time, offering lower power consumption and a smaller size, it isn't surprising that VFD displays eventually disappeared. 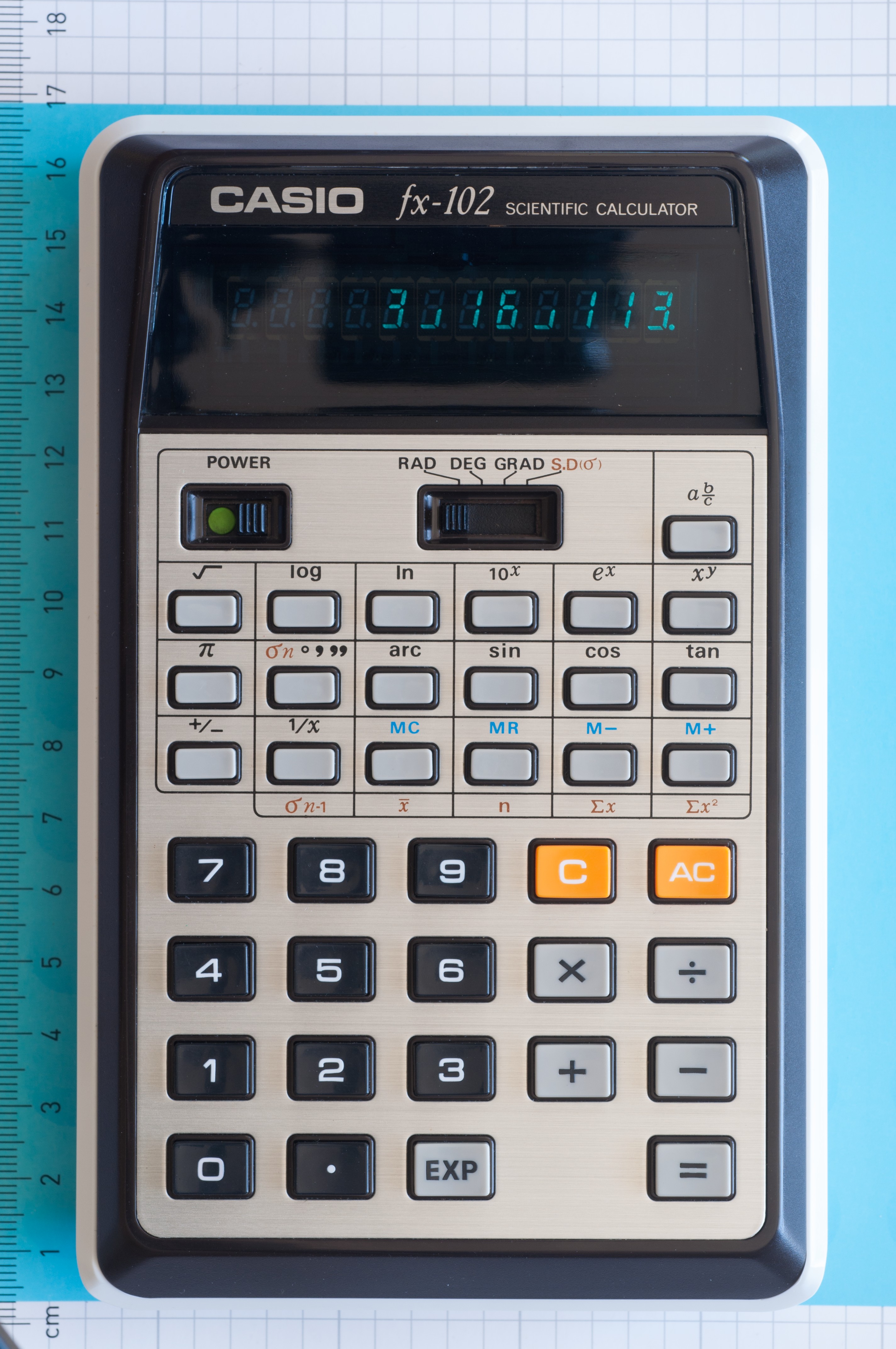 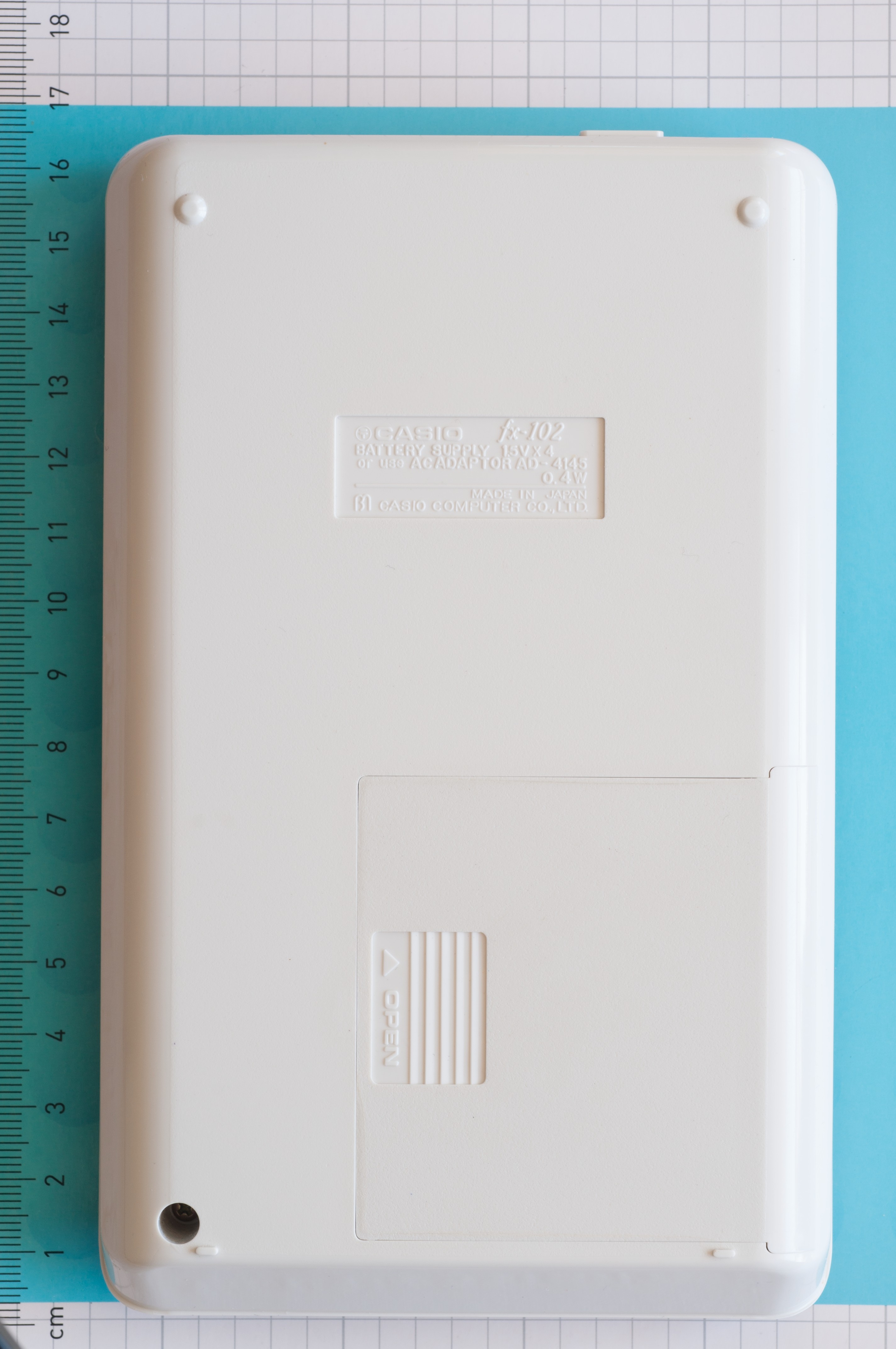 The devices uses 4xAA batteries, and a power consumption figure of 0.4W is printed on the calculator.  However I did do a few tests using a fluke multimeter:

Power off current draw peak: ~100mA (not sure why, switching off seems to draw more current).

Switching between different modes (Rad->Deg->Grad->SD) did not effect the current draw.

So I guess the 0.4W figure is fairly honest.  I can't locate a manual for the fx-102, but the fx-101 which has a 0.45W drain states a lifespan of 25 hours for alkaline batteries, but with the measured figures and the battery specs (Varta AA longlife alkaline) 30-40 hours doesn't seem all that unrealistic if the fx-102 can make use of all of the available battery capacity.

It is a 12 digit VFD, but it never seems to use the left most digit.  Normally, this calculator seems to handle up to 10 digits for both entry and accuracy.  This also means that for numbers big/small enough to require an exponent you actually only have 8 digits of precision, so a good deal of precision is lost once a number transitions to scientific notation, as the last 2 digits are lost in order to display the exponent.

Having functions calculate with less precision than the displayable 10 digits does cause problems however.  For example, with the [x^y] function 2^32 should equal 4,294,967,296; which can also fit on the display of the fx-102 without any issue, but since only 8 digits are used, the last 2 digits are truncated returning 2^32 = 4,294,967,200.  One way to work around these problems is to avoid using x^y for any numbers greater than 8 digits, but this is rather inconvenient.  You could also break it down into smaller parts 2^24 * 2^8, but this requires not only doing the same equation twice over, but also storing the result in memory for each part and then finally multiplying the result at the end.

You can multiply or divide by a constant by either pressing the multiplication/division key twice in succession.

This isn't quite as developed as later Casio models like the D-series (eg fx-100D, fx-115D, fx-991D), where you can also use add and subtract for constants (both real and complex) in addition to using [x^y] and [x^1/y] as constant functions (you specify y, and once set as constant, you can automatically execute these functions by entering for the x-value followed by [=]).  It still can be useful however:

Only the [1/x], [Ab/c] and memory storage keys ( [MC], [MR], [M-], [M+]) can be used while remaining in constant mode.  Be aware though that if you want to store the result from a constant calculation, you need to enter the number and then press [M+] or [M-] key instead of pressing [=] then [M+]/[M-].  This saves an extra step, showing you the result in addition to storing it, but carries the disadvantage of not seeing the result first before storing it.

Now it's just as many key-presses to use [x^y], so you might ask why.  A good reason is that the [x^y] function has at best 8 digits of precision, while basic arithmetic operations including constant mode have 10 digits of precision (+/- 1 digit), so you get a more precise result for the same number of presses.

Alternatively, use statistics mode for squares
Switch to S.D mode, and then take advantage of the sum squared function:
5^2: 5[=][M+]
This has the advantage of requiring just 3 button presses, but since you need to switch to statistics mode, it isn't particularly practical.

If however you are doing pythagorus type equations, statistics mode can actually save a bit of work, for example:

"The main tent pole in a conical tent is 3 metres high, and the radius of tent floor is 5 metres.  What is the length of the tent fabric stretching from from the tent pole to the floor?"
d = sqrt(3^2 + 5^2)

I was already aware that Casio's fraction feature has 2 implementations, old and new.  The older version as found on my fx-100D (c1992) is only able to display fractions while all calculations are also in fraction form.  The newer version as found on my fx-991W (c1998) adds the ability to convert decimals to fractions (as long as the number of digits that make up the fraction including fraction marks don't exceed 10).

The Casio fx-102 is using a version of the older implementation, although it is restricted to only using 3 digits for each component of the fraction.  Furthermore, it is also limited to 10 digits total, including fraction marks, eg 123+45/678 (which will simplify to 123+15/226).  It does work pretty well however, so you can happily continue to add/subtract/multiply/divide in fraction form as long as doing so doesn't exceed 3 digits for any value and 8 digits total for improper fractions.

Unfortunately, this feature comes with a pretty big downside, and that is that any calculation involving fractions can not be stored in memory.  As long as any calculation has at one time made use of the fraction feature, you are unable to store that number, even if the fraction was used several calculations ago.  Since there are no brackets (or stack), this can make working with fractions problematic, as at no time can you store part of the result of an equation temporarily; for example for the equation  1/2*sin(30) + 1/4*sin(60), it is actually impossible to solve using fractions since you are unable to store the answer to the first part (1/2*sin(30)) before working on the second part.

For the age of the calculator I thought the soldering and traces were relatively neat.  There are two, single-sided PCB's, one for most of the important electronics the other for the keyboard.  Both boards are connected by several flat, copper wires.  I've opened this calculator up twice now, and these types of connectors make me rather nervous (I trashed my old SH3 fx-9750G2 by breaking something similar).

Overhead view of the two PCB's: 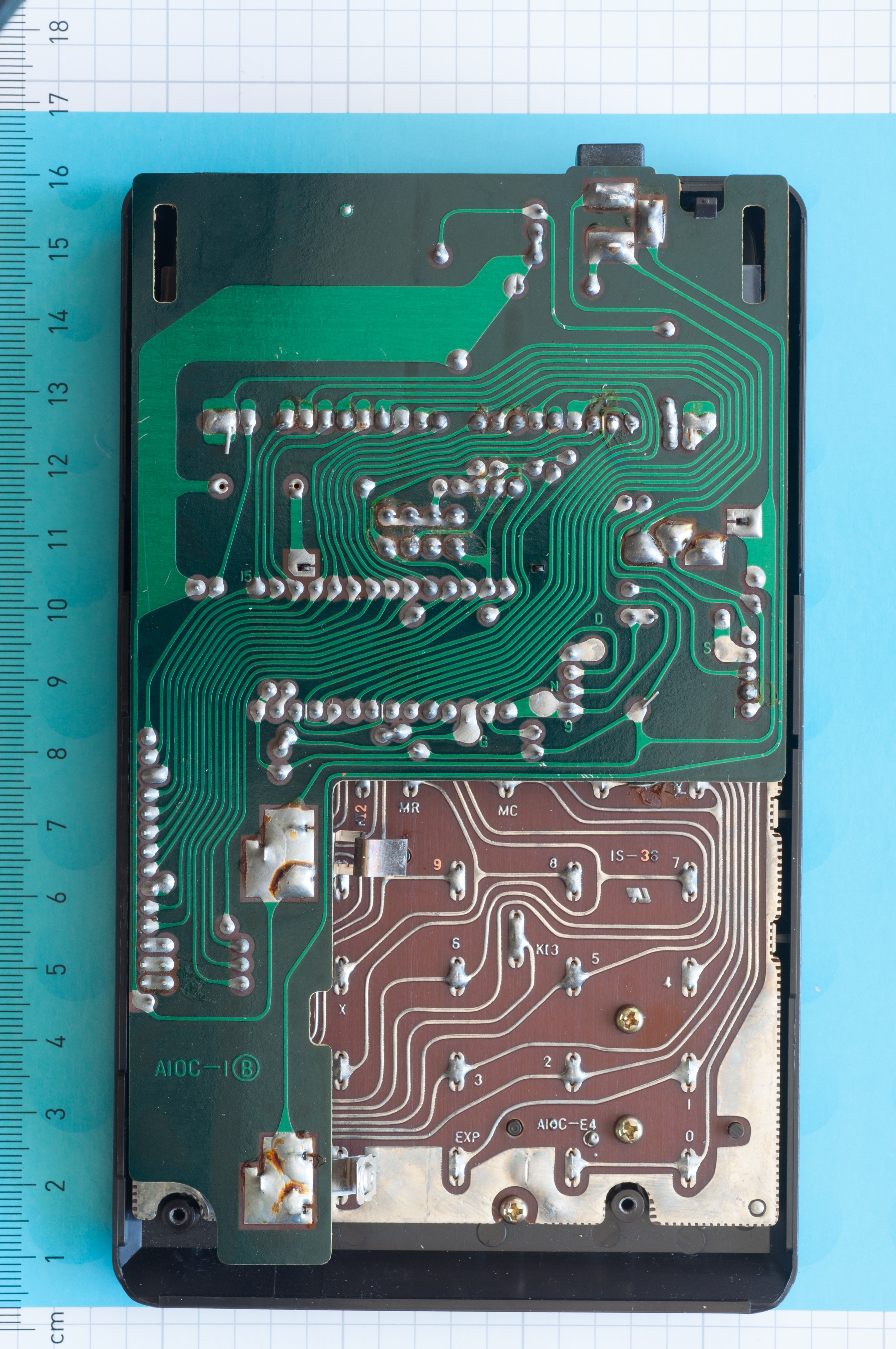 Unfortunately while I know some basics, I'm not particular knowledgable on electronic circuits.  I don't know how VFD's (Vacuum fluorescent display) work, but a quick google suggests they need 2 different voltages, A lower voltage (3V) for the filament (heater) and a higher voltage (12V to 30V) for the segments themselves.  Since this works off 4xAA batteries I'm guessing that there is some sort of DC-DC voltage booster.  While looking at the photograph of the motherboard I noticed that there was actually a 3rd PCB just to the left of the Hitachi HD36130 CPU, my guess here would be that this is the DC-DC convertor that provides the higher voltage for the VFD display. 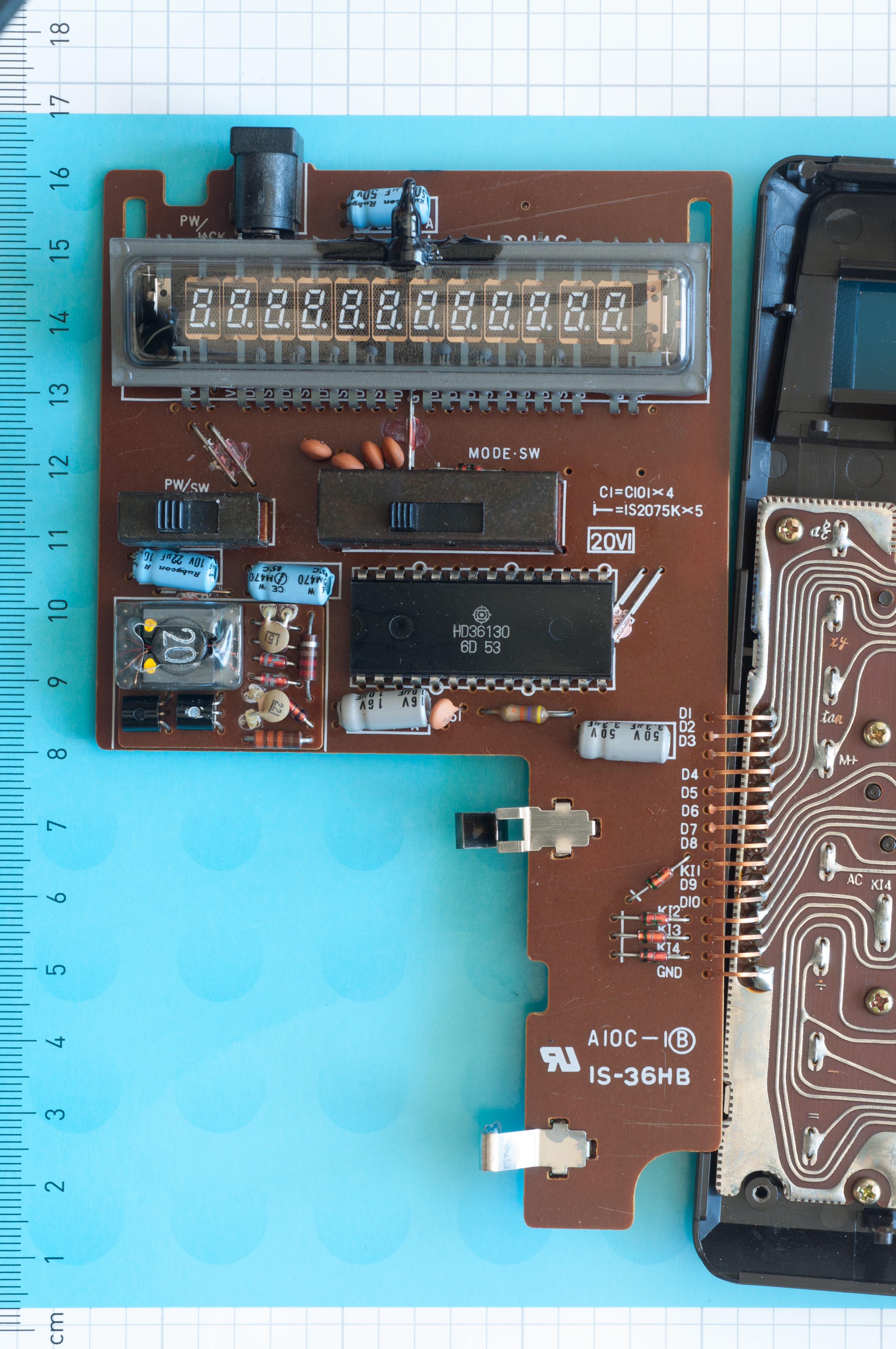 They keyboard PCB looks fairly neatly soldered as well, although it's not hard to spot the repair that was done at some time in the past.  Pressing a button looks to short that button to ground.  There are 4 separate metal plates for the buttons, each with tabs that contact one of the 5 flat copper pads seen on the front of the keyboard PCB.  The 5th copper pad appears to connect to a metal spring which connect the metal face on the calculator to ground.  I've always wondered why older Casio calculators do this, would be interesting to get some insight. 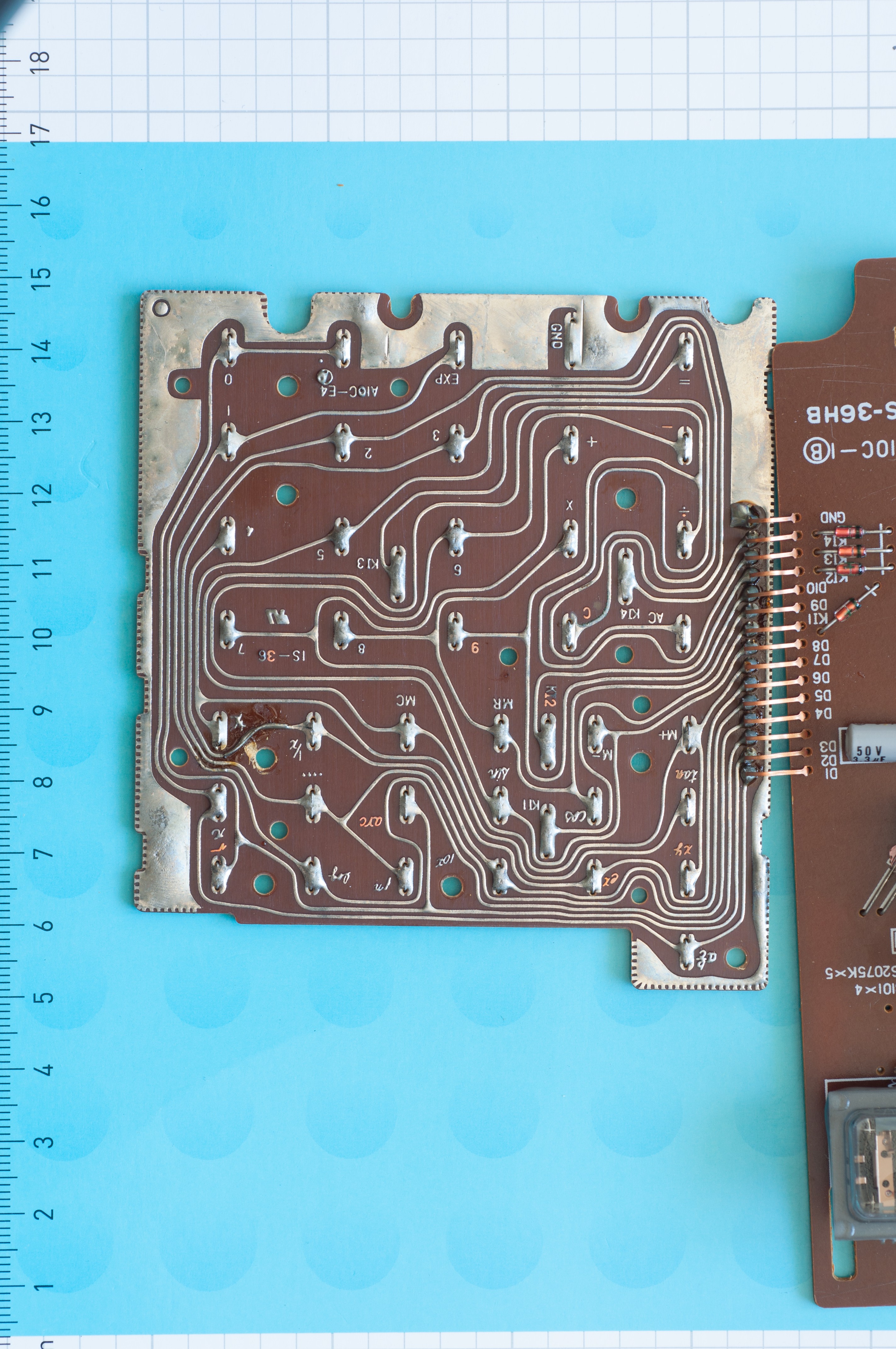 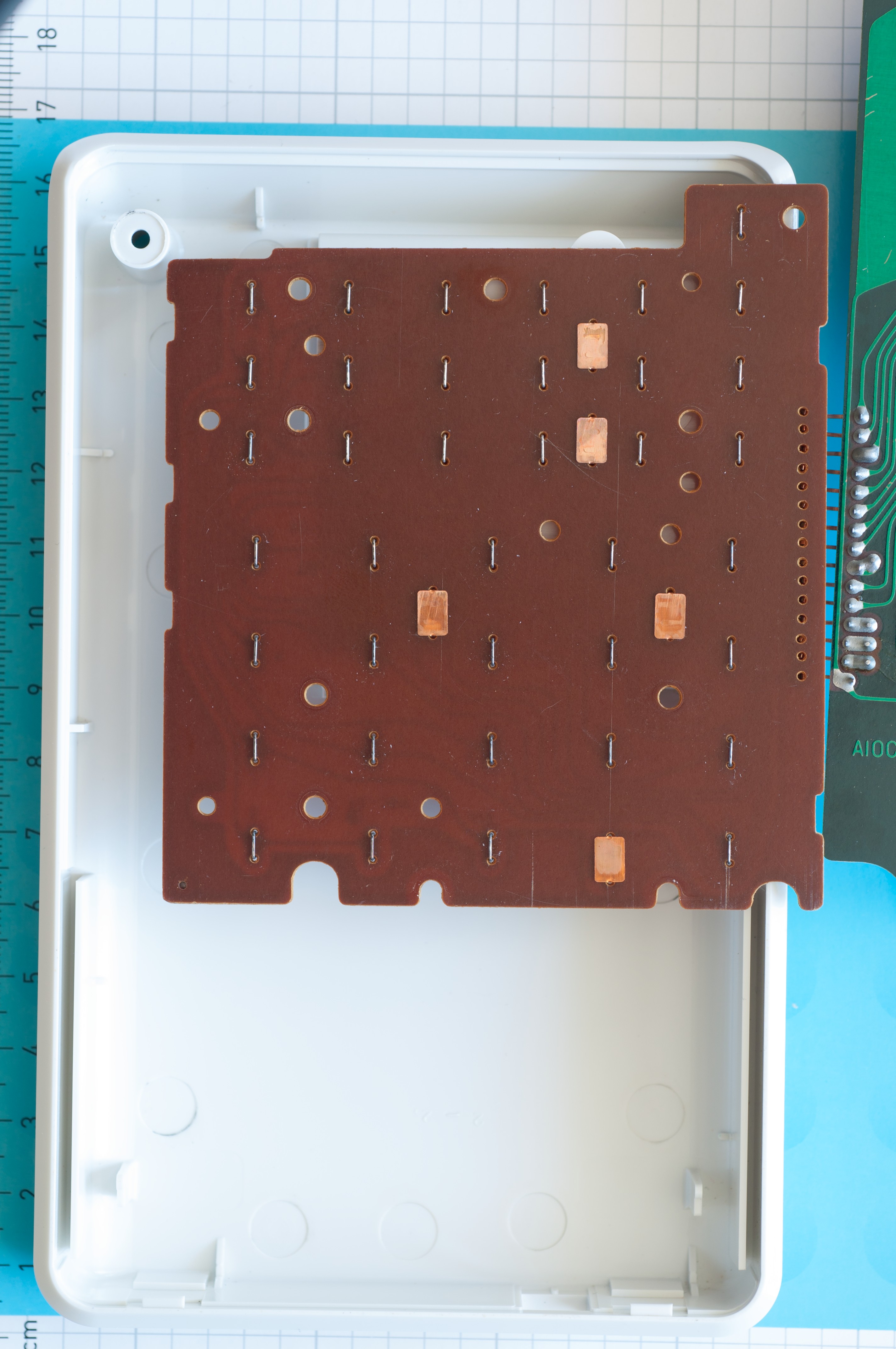 You can clearly see the 5 copper pads here.  For each button, a wire link is used as a contact surface. 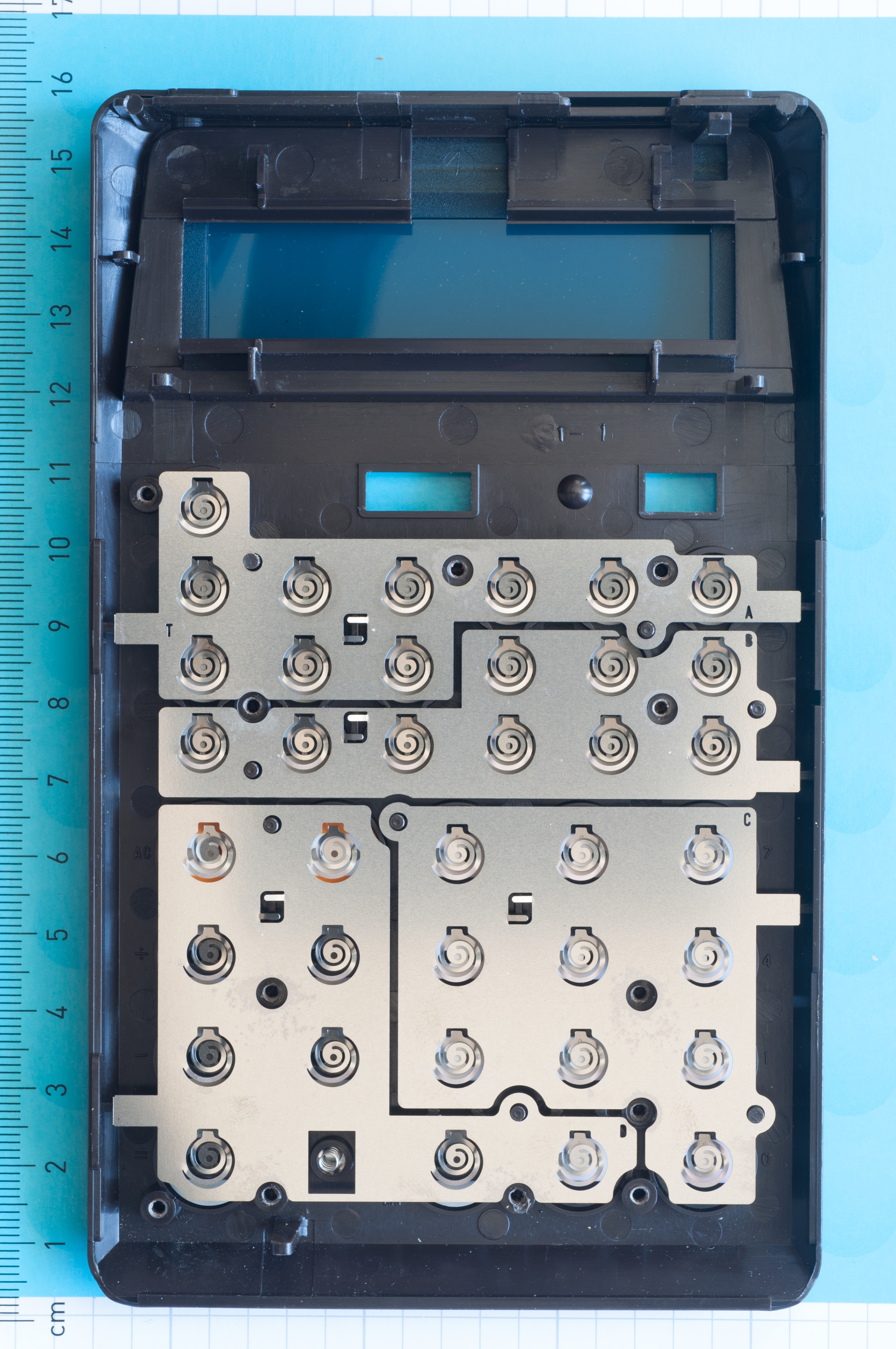 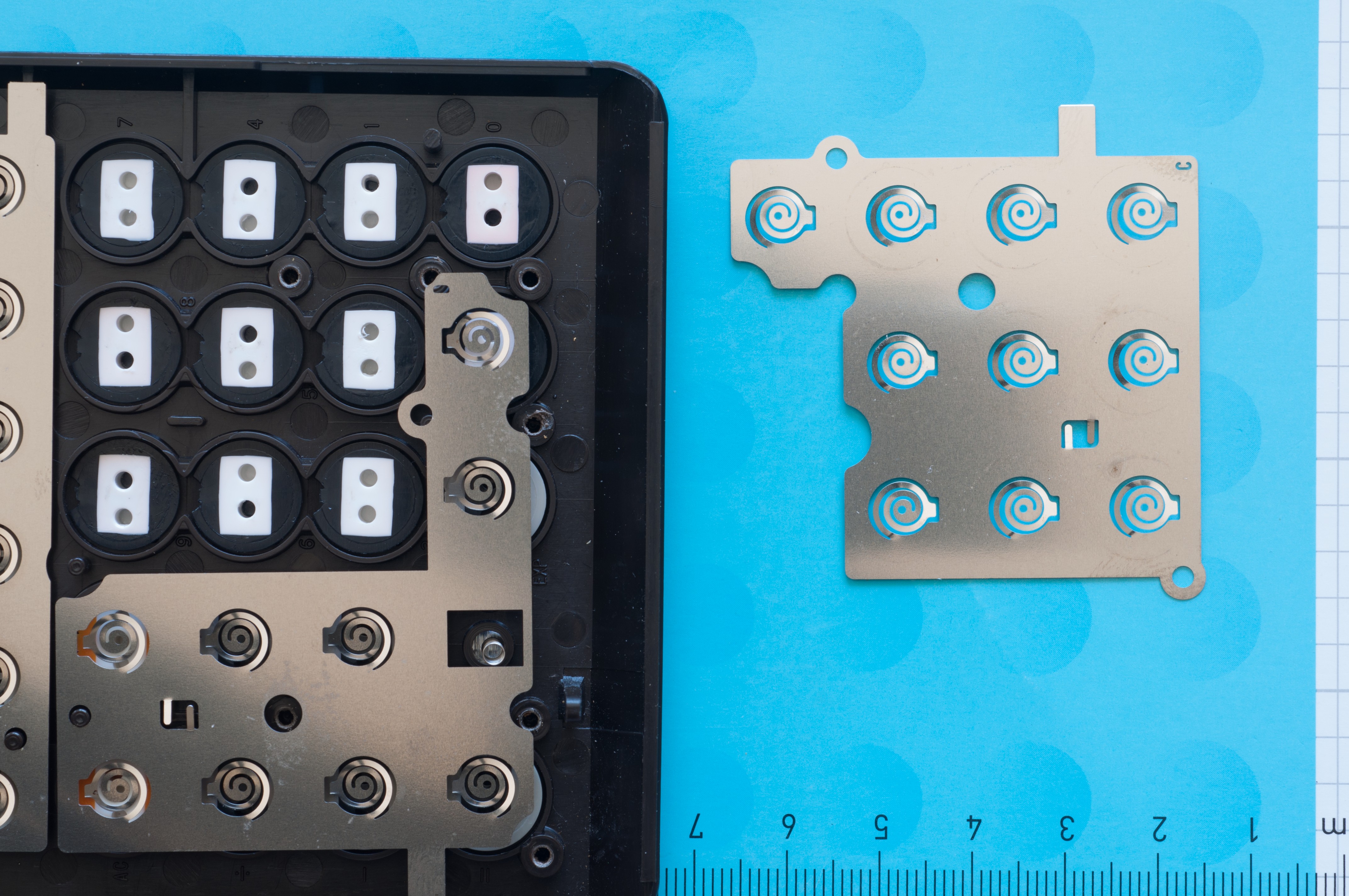 The same piece of sheet metal is shaped into springs for each button.  The plastic buttons use a different coloured plastic to make up the label on the button.  I've seen this on other Casio's and I guess it is pretty common for calculators, but it does seems to be a great way to provide label wear resistance.

Realistically this isn't the sort of scientific calculator I can see myself using in the modern age.  The next oldest calculator I have is the original Casio fx-82 from 1982 (6 years later), which is far more compact, much more energy efficient (0.4W vs 0.0007W, or nearly 600 times less power!) as well as adding much needed stacks in the form of parenthesis, rectangular to polar and polar to rectangular conversions, more constant operations and other functionality.  It doesn't however have the fraction key and it is slower, but considering the rate of progress with calculator technology today, it must of been crazy to witness the changes from the late 1970's to early 1980's.

While the fx-102 may not have much utility in modern times, it does still however provide an interesting insight into the evolution of some of the core Casio features that are standard on later models.  It has the same direct entry system and the early independent memory works much the same way even in modern calculators (M+/M-).  The core fraction entry and display is pretty much unchanged, though the fraction button will toggle between fraction and decimal display, rather than remaining stuck in decimal display.  The exponential button is pretty much unchanged, and the Sexagesmial conversion just added the ability to convert from Decimal back to DMS.  Finally the constant function would get a few enhancements and stick around for a little over 20 years, when it was finally mothballed with the introduction of the W-series S-VPAM models in 1998.