3 replies to this topic

Hello,
I recently picked up an FX-720P on ebay (not working). I cleaned the RAM card contacts with a fibreglass pen, changed the RAM and main Batteries, and it now lives

However..... When looking at pictures of the RAM card fixing on the FX-720P online, it doesn't match mine!

The ones I can find (underside view) look like this..... 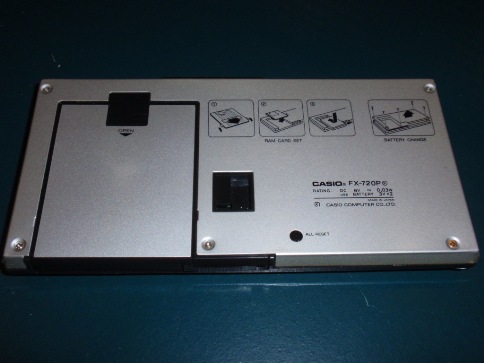 Is this normal? The 2 long springs under the RAM cover made it a real b*tch to get the cover back on!


But I have found another image like mine here.....
https://goo.gl/images/8kpThq

...so I guess its normal? Maybe a UK variant or earler/later model?

I'm no expert in this, and I doubt anyone else is on here. I know companys send out different models to different countrys (or they used to at least, not a prodominant as it used to be). I would try and find an ad with the same model as yours, that's what I usually do when I don't know if I have a legitamite item. The inside might be different model but it still might be a legitamate product from them, just start looking up serial numbers and any other referenses.

Another far stretch is that its just a older model of the calculators back panel, all the websites and videos show the same fron pannel but not the back. Here is a back pannel of a older casio calc that looks eirily similar to yours, maybe they didn't update the backpanel for your calc until later. I've ran into this problem before on a game cartidge, I thought it was fake because a few of the chips on the inside were different than ones I saw on the internet before relising that it was made to allow different chips at different times. I hope my rambling was semi helpful (Although most of it you probably already knew)