8 replies to this topic

An attractive appearance and a convenient, easy-to-read keyboard are important criteria for any calculator. I made an attempt to analyze the evolution of attitudes to this topic among various manufacturers.
1) These are classic representatives of calculators for high-paying consumers of the early 90`s: hp-48gx(~$1000)/ti-85(~$550). Approximate retail prices are given in the modern equivalent for 1993. For such a price, the manufacturer did not spare the paint for the letterings.

3) fx-2.0/graph25 from CASIO. The quality of the paint above the keys in graph25 is slightly better than in fx-2.0. However, to compensate for the cost, the letterings are either thinner or smaller. Visual perception has deteriorated.

4) graph25/fx-9850gb+. It seems that the price of paint exceeds the price of gold. According to some distributors, modern buyers can`t afford an extra $1 for the beauty in one calculator, so here we see another masterpiece of design thought.

5) ti-83+/ti-83+SE. Texas Instruments took care too of low-income engineers and students, saving on design. In the "Silver Edition"(sic!) the LCD was also "optimized" (by reducing its quality).

6) fx-991 classwiz(brand new)/(used). After several months of using the device in the production room and after a dozen wipes with a dry cloth from dirt, the inscriptions above the keys became unreadable. And then my talent as a graphic designer was awakened ...

Wear and tear of the printing on calculators is something that unfortunately isn't featured in reviews.

For myself the Casio fx-991MS 2nd edition has to me the nicest printing for labels I've seen so far in a calculator; but it barely gets any use (and has had it's battery removed and been packed away as of today) so I doubt it would fair much better than your fx-991ex.  What does impress me though is that the printing on the fx-991ex buttons presumably got similar treatment but seem unworn to me, so that is something in it's favour (I have some old fx-82AU Plus's and all of them have some sort of button print wear).

LCD displays also deserve to get a decent review as well.  Initially I thought the contrast was decent on the fx-991MS 2nd edition and it was great having the contrast adjustment, but the calculator as I discovered would be very difficult to use without it.  It has one of the worst viewing angles of any calculator I have used, forcing you to lower the contrast if you aren't looking directly at it; it may look dark and contrasty straight on, but once you are at any angle it gets progressively harder to read the digits until they all become "88888888's".  Older single line Casio's and Sharps don't suffer from this problem (I just acquired recently a Sharp El-506P from the mid eighties that has both a great contrast panel and fantastic viewing angles), although most of the modern natural VPAM models have great viewing angles as well....perhaps it is just the 2-line Casio's that have the viewing angle problems?

In any case good job putting the labels on...still, I have to ask why do you have such a huge label for the QR button

Hi, MJim! I agree that "wear and tear of the printing on calculators is something that
unfortunately isn`t featured in reviews", as you`ve mentioned. The size of the labels and the correct color scheme in the design also matter.

Oops, I was going to draw a NFC support :-)
The market for scientific calculators today is focused on a huge number of consumers who are poorly versed in the merits of the product.
Scary and incomprehensible letterings (LCM, GCD, log, HEX, List, nPr, Rec) should not be conspicuous, so as not to frighten potential buyers.
Advertising tricks from the last century (64KB RAM/3-colour display/basic-like programming/1.5MB flash memory) now may bring a smile to the smartphone`s user.
Abbreviations like QR, 5G, Gorilla Glass, USB power, SOLVE, COG LCD are modern, cool and attractive, so they should stand out from the general background.

I was poking fun at the QR verification feature having such a big spot, but I think that you can use the QR function for graphs, so that backfired a little.

I picked up a Casio fx-570s quite recently; the first generation VPAM model which doesn't feature a 2-line display, nor does it support implicit multiplication.  It does have an interesting styling choice where it paints an Aluminium front cover with black-paint.  Certain letters like the hexadecimal characters are displayed by removing the black-paint to let the silver aluminium shine through.

It has a terrible display though, and interestingly, the internal LCD display is set tilted slightly towards the operator, making it difficult to read while looking perfectly perpendicular to the display.  I don't know what happened with Casio's display quality, but it took me obtaining an old Sharp EL-506P to realize how fantastically vivid 7-segment LCD's actually were from the 1980's.

I put 3 old calculators together (all 3 have pretty much brand new batteries) to show how their displays look front on and from a angle. 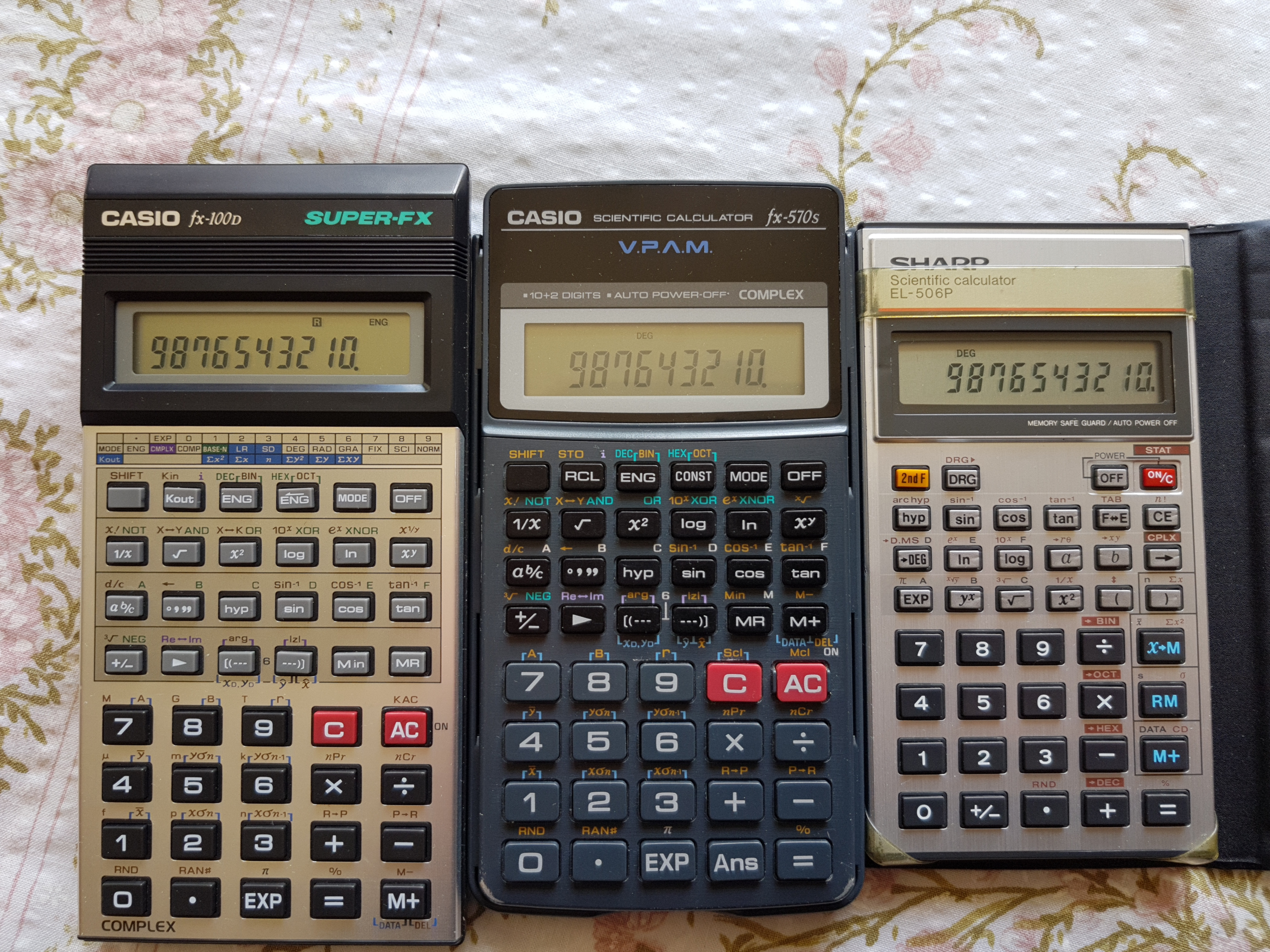 The Contrast on the fx-570s is pretty bad compared to the other older calculators.  Part of it can be explained by the clear plastic window adding to the overall number of reflections, but it is still much harder to read regardless. 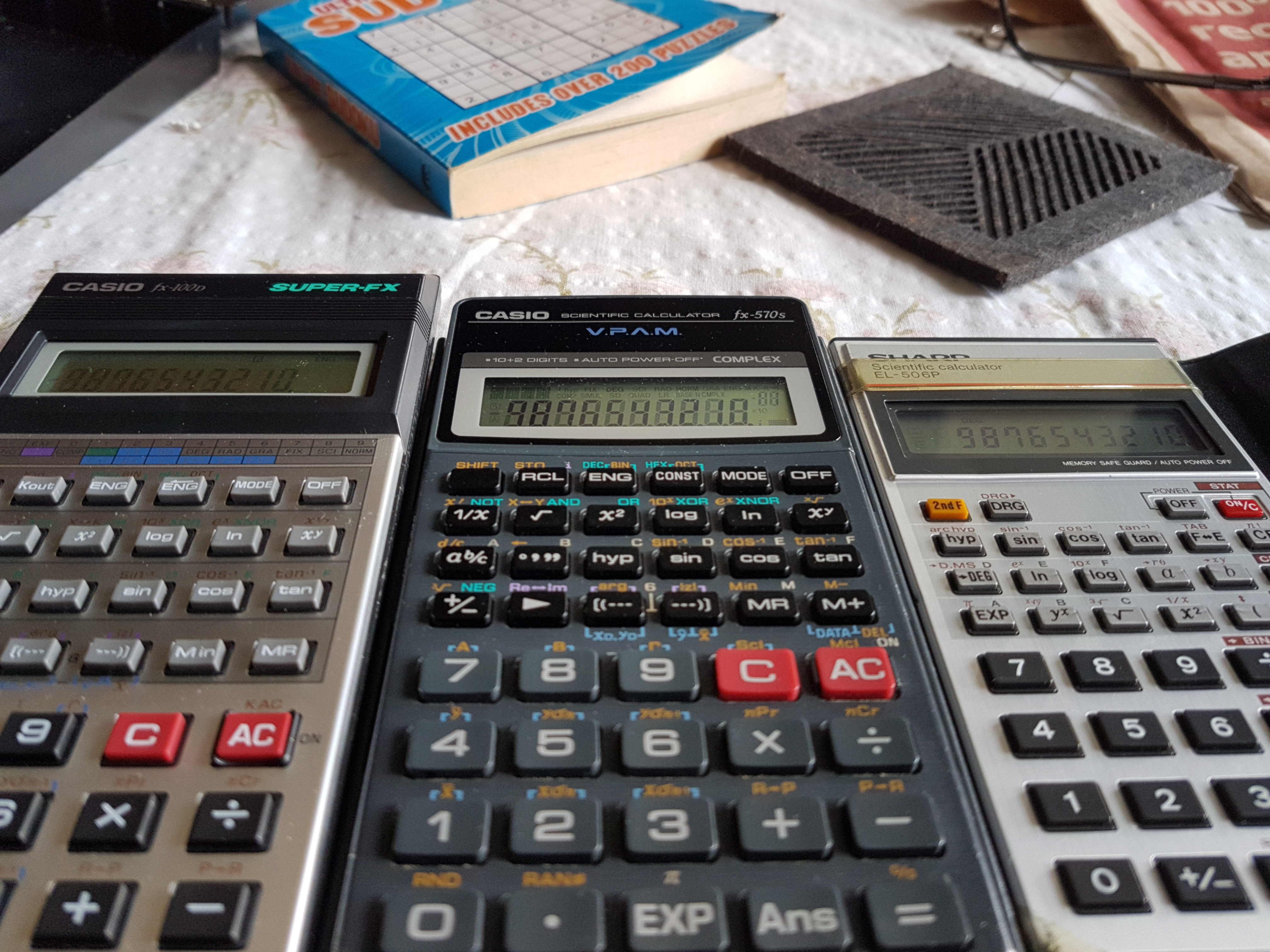 To be fair the plastic window doesn't help the fx-570s much with reflections, in fact this second picture I tried to use a polarizer to cut down on the reflections (which is hard to do without turning the displays black) to show how at steep angles the fx-570s display becomes unreadable since the other unused segments become dark.

I really love the little Sharp EL-506P, but I'm currently attempting an introductory course on probability online, and I am very much missing the nPr & nCr buttons.  I would love to get a hold of the EL-506A (it's successor).

I don`t know what happened with Casio`s display quality ...

Displays in handheld devices are a separate broad topic. I believe that the quality depends on the customer`s requirements, not on the manufacturer. Here is a typical example: 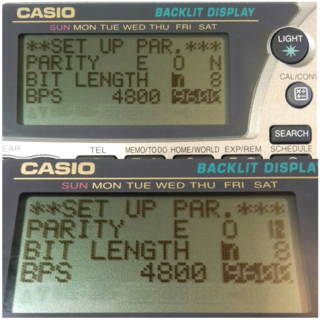 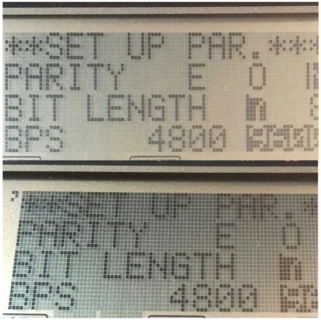 On the left - a LCD with good contrast and large viewing angles (1995).
On the right is a terrible display in CASIO products made for another region a year later (1996)
Next picture: the two same TI`s calcs. Left is made in 2004, the right one is from 2000. 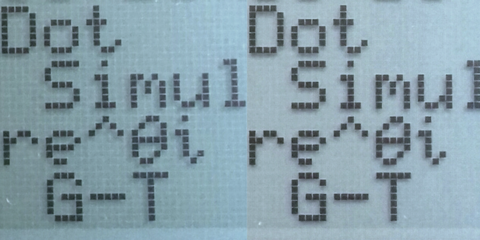 Here the differences are not very noticeable, but there are cases much worse.

Thanks Hlib2 for providing some examples of display quality.

When talking about Casio's display quality I was more referring to the segment display versions, but perhaps I'm being a bit unfair; as I do have an old fx-82LB which has pretty poor contrast compared to it's successor the fx-82SX.  However, while the fx-82SX has better contrast for the most part, it also suffers from problems with a narrow viewing angle (the same problem I see with the modern fx-991MS 2nd edition), while the fx-82LB maintains it readability through a much wider angle.

fx-82lb was my first scientific calculator from CASIO, which I bought back in 1995 in its advanced reincarnation (on the right). I don`t have this calculator at the moment, so the image is borrowed from Google. 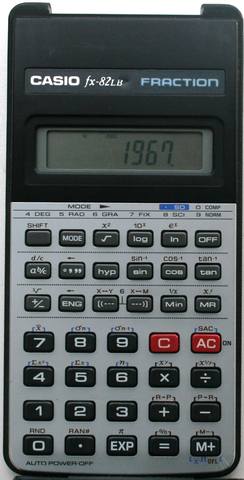 fx-82lb was my first scientific calculator from CASIO, which I bought back in 1995 in its advanced reincarnation (on the right). I don`t have this calculator at the moment, so the image is borrowed from Google.

Hey!, the one on the right which says it is a casio looks to be another Sharp EL-506P clone; compare it to the one I posted above, same keys and functions.  The one on the left is the one is the fx-82LB I have.

I decided to post both the fx-82SX and fx-82LB to show the contrast problems with the fx-82SX at wider angles (apologize for the drunken looking angled shot): 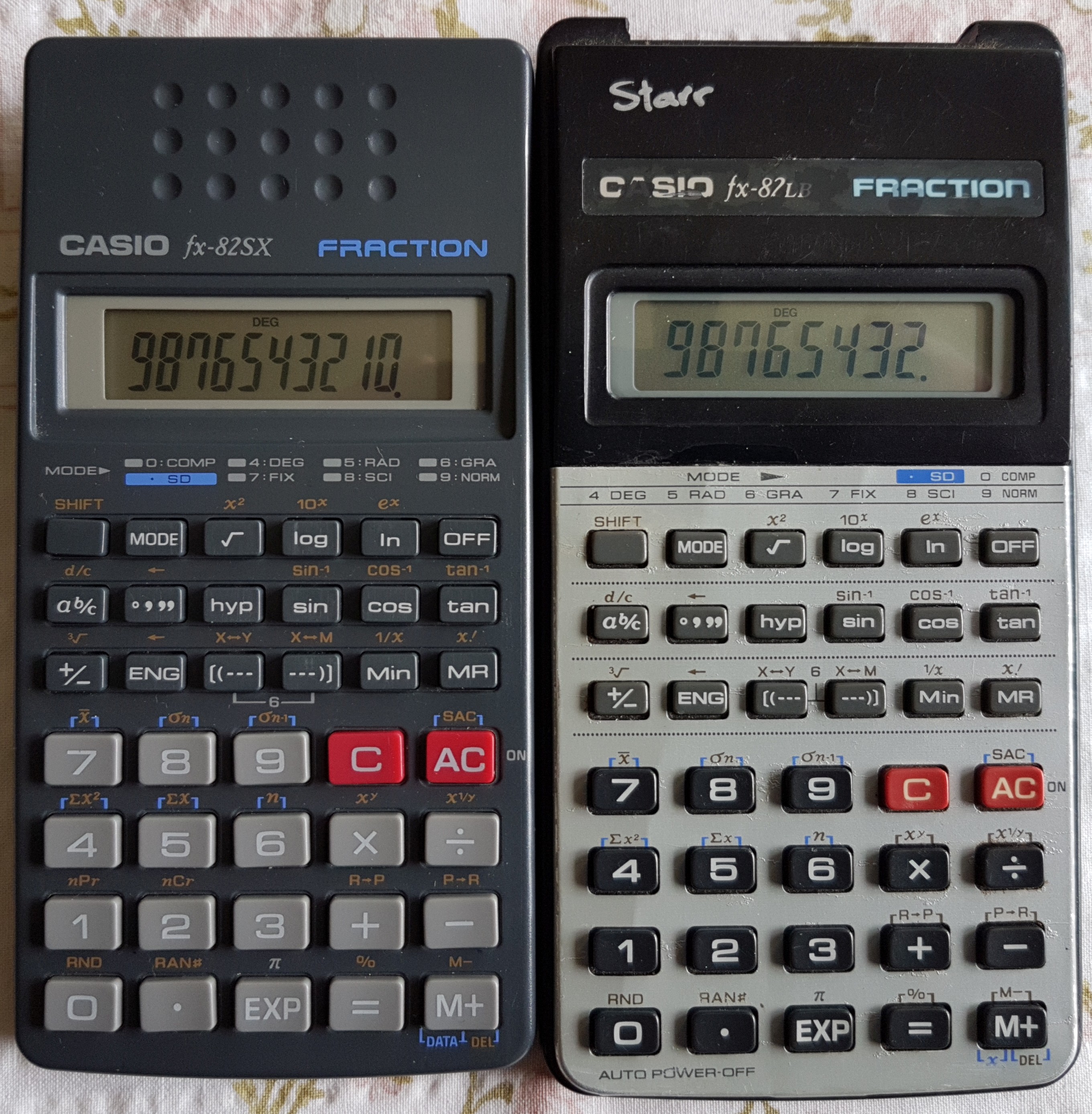 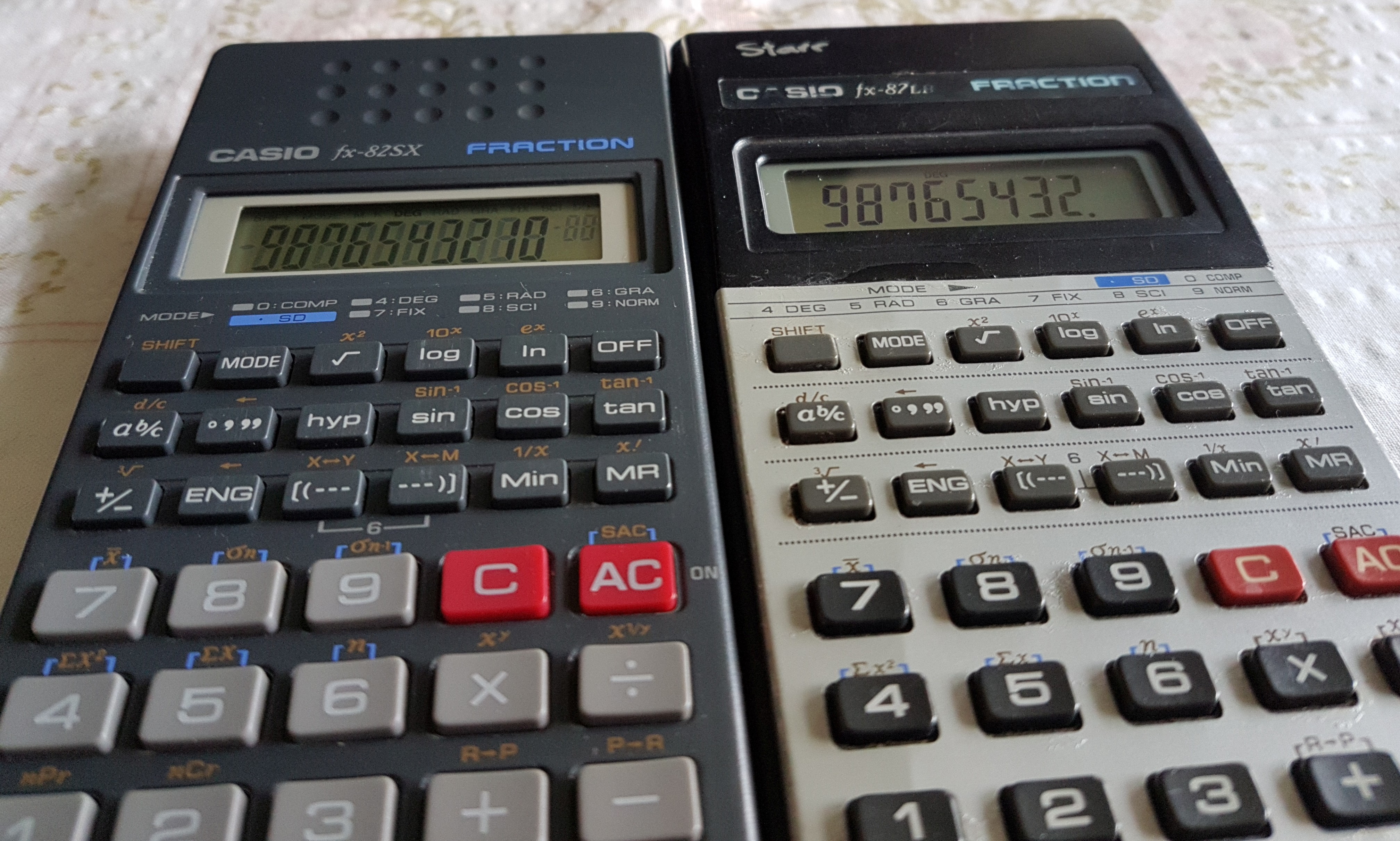 As can be seen all the unused segments become visible at steep viewing angles for the fx-82SX and that also seems to be a big problem with the 2-line series from Casio.  In saying that, the fx-991W (probably my favorite of all the Casio's I've used so far outside the graphing ones) is subject to the same problems, though now the display cable is disconnected and in need of a new one, so it's more or less out of order for good.

A logical question arises: why couldn`t the manufactorers of El-506P clones add a few useful features to their product (nPr or nCr at least)? Answer: the original developer and the project`s sponsor is unknown to us. We only see the end result under different brands. Here is an example of three calculators. Guess three times - who is the two excess players in the market? Yes, those are customers for the CITIZEN and HP brands. 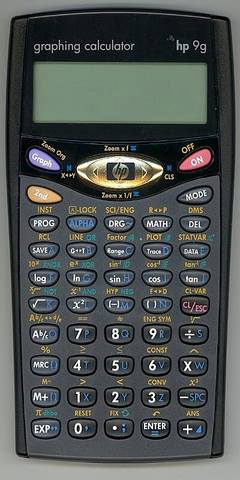 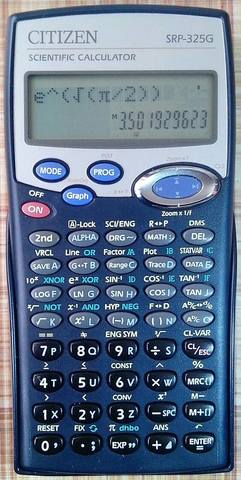 I have never seen a better keyboard and lettering in calculators than in the SRP-325. In addition, the weight of the srp-325 is 85g (against 125g for HP). But CITIZEN didn`t have enough money for a good display, they even made a decimal point half a pixel in size. As for HP - they saved as paint for inscriptions as for the normal design of the case.
CASIO probably still wins. Junk like the fx-82sx is bought by 90% of calculator consumers.
Following picture: dark gray pixels in some batches hp-50g instead of real black pixels as in hp-48gii and rejection of the Japanese style in the design in favor of a terrible black body. I don`t understand all the nuances of big business. 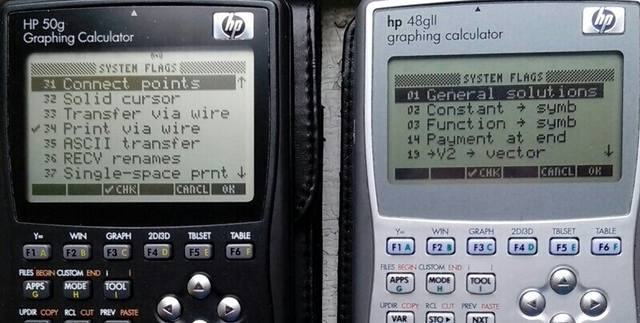 Back to General Discussion

Also tagged with one or more of these keywords: casio fx