5 replies to this topic

A couple of people asked me to review the humble Casio fx-5800P. Although it has some limitations its a great option for a day to day calculator if you don't need CAS or graphing. I wonder why Casio chose to only put it on the market in a small set of countries?

ps. Hlib2 if you read this I tried to follow a couple of your suggestions in the video.

Thanks for the review!

How is the display quality?

The fx-4500PA that I have is probably amongst the worst Casio display I've ever used (brand new batteries), where the contrast seems set far too low with no option of changing it, so I need to view it at an angle to clearly see the digits.  Other calculators like the fx-3650PII or fx-991MS 2nd edition have great contrast, but suffer poor viewing angles so I need to set the contrast low in order to use the calculator at an angle (ie not perpindicular), without having all the segments being 'lit'.

From your video the LCD display looks fantastic, but how does it perform when titled away from you?  How would you compare it to other calculators that you own?

I own a fx5860G too: Much better! You may change the contrast setting to your requirement.

But there are differences: It is a much larger ppc, and the batteries don't last forever. I use rechargeable (eneloop) which need to be recharged around twice a year in normal use. Shorter if you write and especially run programs.

The display of the fx-5800p is pretty clear from different angles. Definitely way better than the fx-4500PA, but not quite as good as the  fx-9860g Slim which seems to have an anti-reflective screen.

@ akuzmicich
Thank you for an interesting review of the calculator! If I had met the fx-5800P earlier, I probably would never have bought the fx-991ES and fx-991DE X.
@ other posts
Back in the mid-90s, CASIO began producing standard 96×32 dots LCD of excellent quality and equipping pocket organizers with them. 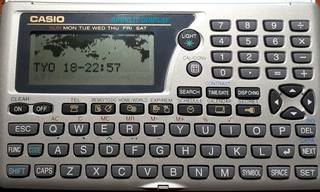 Since 1999, displays with an anti-glare effect without additional plastic protection have begun to appear in popular devices (afx-2.0, fx-9750g+WE, sf-6500SY etc.). 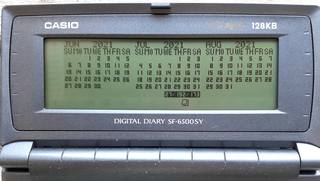 So, the fx-5800P does have not the best LCD that it could be equipped with at the time when this calculator appeared on sale.

Thanks, I just realized that I didn't register that the fx-5800P has a reflective window on top of the display (argh!).

Casio seems to be inconsistent with their anti-glare coatings...my fx-9750GA Plus or fx-9750GII has this anti-glare coating but surprisingly the fx-CG50 or fx-CP300Plus does not (the Classpad especially could do with an anti-reflective coating, though I wonder if it has to to with the resistive touch-screen technology as my Palm pilots have a similar issue).

This goes for display windows as well (more reflective surfaces, with the bonus of trapping dust or other debris under it!).  The fx-115MS doesn't have a display window, but the fx-991MS does, and finally the fx-991MS 2nd edition doesn't have it.  Noticed this as well with the Sharp EL-W516XBSL not having a window and then it's successor (inferior IMO as they removed the formula memory!) the EL-W516TBSL added it back...I don't know why since contrast suffers as a result.

Still I wasn't aware that the fx-5800P used flash memory, though I guess it makes sense without a backup battery.  I like that they went with a AAA battery, as I've had a pretty good run with Eneloops (Alkaline is a completely different story having repaired two calculators that suffered quite a bit of damage because they leaked).  I'm a little disappointed that the fx-5800P doesn't at least have complex support on par with the fx-9860 series (eg e^i, although the fx-9860 series doesn't seem to handle complex numbers inside of trig functions).