7 replies to this topic 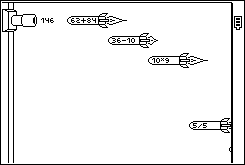 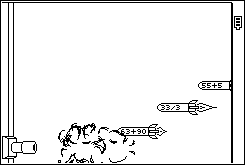 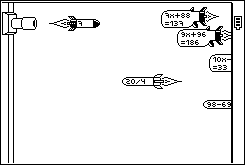 
This is (still) a very early version of my newly created game concept.
Basically, you are a kind of space station attacked by missiles, and your only weapon for defending your base is a simple missile launcher.
Of course, there is a little twist: each of the enemy missiles has a simple calculation written on them, and you will have to find the results to destroy them.

Again, this is a very very very very early version which is currently lacking explosion effects, levels and all this stuff. I'm planning on adding square roots, and eventually "equation dropships" later. I'm only posting here to get some feedback from the very few people who are still here, and aware that CPLua exists (because I've seen many ClassPad owners here who don't seem to know that).

It is using a modified version of my Font library, as well as the same engine as my "Nameless Space Shooter" (hence the Space folder you will find in the MCS).

You know what I am expecting for you. Just please take some time to enjoy the gameplay and tell me what's wrong, what should be improved, what may be added, etc...
Here is the complete list of current issues I am aware of:
- The game is way too hard for beginners, this will be fixed by adding several difficulty levels
- It doesn't get harder as you destroy more enemies, again, adding level system
- The cannon may be moving too slowly, going to tweak that a little
- There are no firing effects (missiles fired by player appear out of nowhere)
- Other random gameplay glitches that will be fixed

And what I'm planning on adding later:
+ Difficulty levels (starts pretty much easy, with operations such as "12+29", and becomes harder as you get a better score)
+ Missiles with square roots, exponentiations, factorials, etc...
+ Different types of enemies (meteors, equation dropships, maybe even complex missiles for advanced players)
+ Quaternion missiles, anyone?

I'm not adding this to the file sharing because people are blind retards who didn't even see my notice about how they should be nice and give feedback. I got 12 clicks and 1 comment for my old space shooter. I guess most of those are like "lol new gaem dling it kthxbye". Glad to see what the ClassPad community has become.

Lol, one of the first games on a calculator that is actually educational.

really a nice one

It was really better that you rotated the gameplay to enlarge the screen. And it's a good idea to add linear equations.

Two little things I noticed: The rockets your station is firing are not as long as your number if you are typing a huge one. And secondly: As I entered many digits, suddenly an exclamation mark appeared...

I don't know how I got this and it didn't work another time...
But on the whole GOOD job!

The xplosion effects do not look so bad! Well, own opinion...

Two little things I noticed: The rockets your station is firing are not as long as your number if you are typing a huge one.

That's normal, it's a simple picture. But you gave me a great idea, I can make the rockets expand the longer the number you have typed is.

And secondly: As I entered many digits, suddenly an exclamation mark appeared...

I don't know how I got this and it didn't work another time...

But on the whole GOOD job!

The xplosion effects do not look so bad! Well, own opinion...

And I was talking about the old explosion effects, they were absolutely ugly.

This is a really nice looking game.

Is it ok if I use the same concept for a LuaZM game?