8 replies to this topic

Yet another program to do prime factorization for any number. Not the fastest, not the slowest, if there's anything interesting about it is that there is zero explicit primality checks. It's just that the way it extracts factors happens to extract primes only.

One of my personal project was how to make faster prime factoring in Casio calculators including fx-5800P.

I was so impressed by a post in UFC by secutor, it is so fast.

Anyway, just for your interest, let me introduce fastest prime factoring program (FACTOR-F2) running on fx-5800P. (I'm not sure you are interested in this...)

This file size is rather big:

Detailed description how to make this is here in Japanese but using Google translate may help, I hope.

Hi Hlib2 and everyone

Yes, the algorism is quite good and I also could not find any other faster one.

I do not have old models such as fx-7400G or 9750G. Now I realize there is an restrictions on nested loops of type of While. Thank you for this.

The oldest model that I could port the algorism to is CFX-9850G. Same program file also runs properly on CFX-9850GC PLUS. Casio Basic of these models have some problems and do not allow simply running g1m files that run on fx-9860GII or 9750GIII. So I needed to modify to have them run on CFX-9850G range.

I ported the nice algorism to Python mode (Casio Python) and C.Basic with more ... +2 +4 +2 +4 ... for faster process and also expanded to accept 15 digits input, because Casio Python and C.Basic has calculation accuracy of 15 digits. Casio Python runs very fast as well as C.Basic.

I also ported to many Casio graphing calculators from very old models to latest models as much as passible.

If you have any interest on details in source code, please download subsequent program files listed below.

* fx-7400GIII Casio Basic does not have Matrix functions, so I needed to replace matrices to lists in the program to make it work. 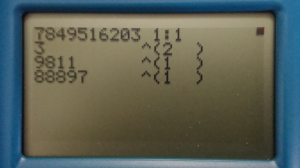 * CFX-9850G range Casio Basic does not allow CR at beginning of line and at right after Then and Else, so I needed to remove CR at those above 3 cases from g1m program file that works on fx-9860G range and fx-9750GIII. This modification gives very poor readability on display. 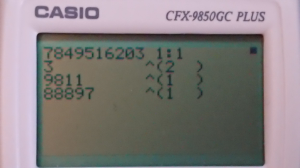 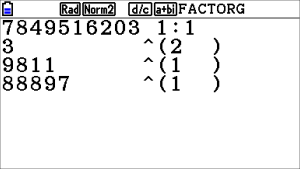 * There was no turtle.py and matplot.py released when I made this, so I used my original user module, u.py including following functions (this modules is much more convenient to me);

- locate(): sets position, size, color of output characters and parameter to transfer to VRAM or show on display

* How many times the algorism search, the search # is indicated. This has good relation to process time. 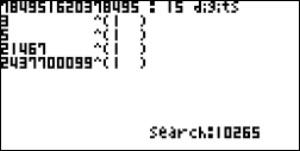 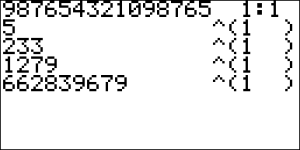 I measured process time for each then C.Basic for CG on fx-CG50 gives fastest result that is much faster than built-in prime factoring feature of fx-991EX.

To be honest, I wanted to make program faster than the built-in feature so I tried to make fastest programs on some different platforms.

If you have models of them, please have fun!

This is a very interesting training of programming skills in the problem of decomposing a number into multipliers. Some calculators, for example, do not allow you to change the parameters of the "FOR TO NEXT" loop inside the loop, but this would be the fastest program. Here is a universal program for CASIO-BASIC, wich is almost the same in speed as the program from Krtyski. Saving the solution in the array, in my opinion, is more practically. 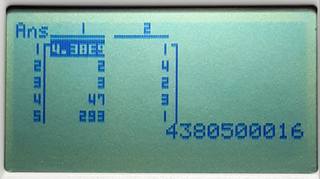 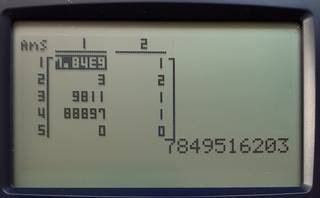 The algorithm with the gotos seems to be using the same logic as mine. I don't know how faster it will be with gotos though.

Hlib2 can you please time the above version on the same calculator? The only change I made is three lines from the end.

Also tagged with one or more of these keywords: fx-5800P